(continuationof 4th and 5th columns). October 1955 – Article ‘The West leads in gathering this harvest from the sea’ from ‘The Sunday Press’ on the Lobster and Crayfish business.

1962: Article on Yann Fouéré’s book, ‘La Bretagne écartelée’, by Dr.Noelle Davies in ‘The Welsh Nation’, under ‘The ordeal of Brittany’.

August 8th1967: Article ‘In exile with the MOB’, Mouvement for the Organisation of Brittany, in ‘The Sun’ newspaper. Malcom Stuart reports on the Bretons who are fighting from Ireland for their freedom.

1969: Article on ‘Future based on a hundred flags’, l’Europe aux cent drapeaux’ by Yann Fouéré(Presses d’Europe) reviewed by Dr.Noel Davies.

1975: Article in the Financial Times, following the invitation of Yann Fouéré to Brussels, by a group of European federalists, to speak on European integration.

November 1975: Article on ‘Fighting to release a Breton’ in The Welsh Nation. 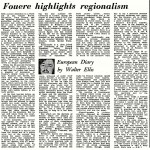 November 1975: Article on ‘Fouéré highlights regionalism’ by Walter Ellis in the Irish Times.

January 1976: Article on ‘The Fouéré Case’ in the Irish Times.

February 1976: Article on ‘Breton Nationalist freed in France’, by Richard Norton-Taylor in ‘The Guardian’.

January 1976: Article on ‘Release my father plea…’ by Michael Hand in the Sunday Independent.

Januuary 1976: Article on ‘International affair of the jailed Breton’ by  Tom Fallon  in the Irish Press.

July 1976: Photo by Paddy Whelan of Yann Fouéré being greeted by his wife, Marie Magdeleine, and daughter Olwen, on his arrival at Dublin Airport, with article in Irish Times.

July 1976: Interview of Yann Fouéré by Caroline Walsh of the Irish Times.

(continuation of 1st 2 columns) Nov. 1981: Article in ‘The Sunday Press’, Desmond Fennell on Sunday, on ‘Hume joins the Connemara school’ – school of thought on Europe, founded by Yann Fouéré in 1968 when he published his book, ‘Towards a federal Europe’, translated from ‘L’Europe aux cent drapeaux’.

2001- Article in No.114 of ‘Carn’, a link between the Celtic Nations, following the publishing of his book ‘Europe! Nationalité bretonne…citoyen Francais? 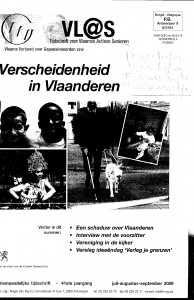 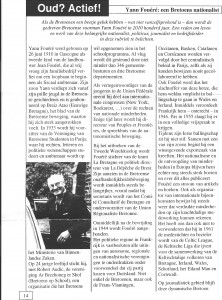 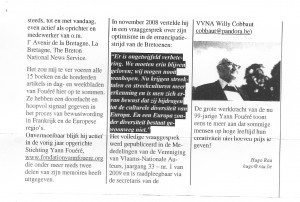 July- Aug.-Sept.-2009: Article in the Flemish League magazine for third age. (Translation into English will be posted soon)

See also under ‘News’, and ‘Actualités’ on the French site, for the latest articles on Yann Fouéré’s 100th birthday.